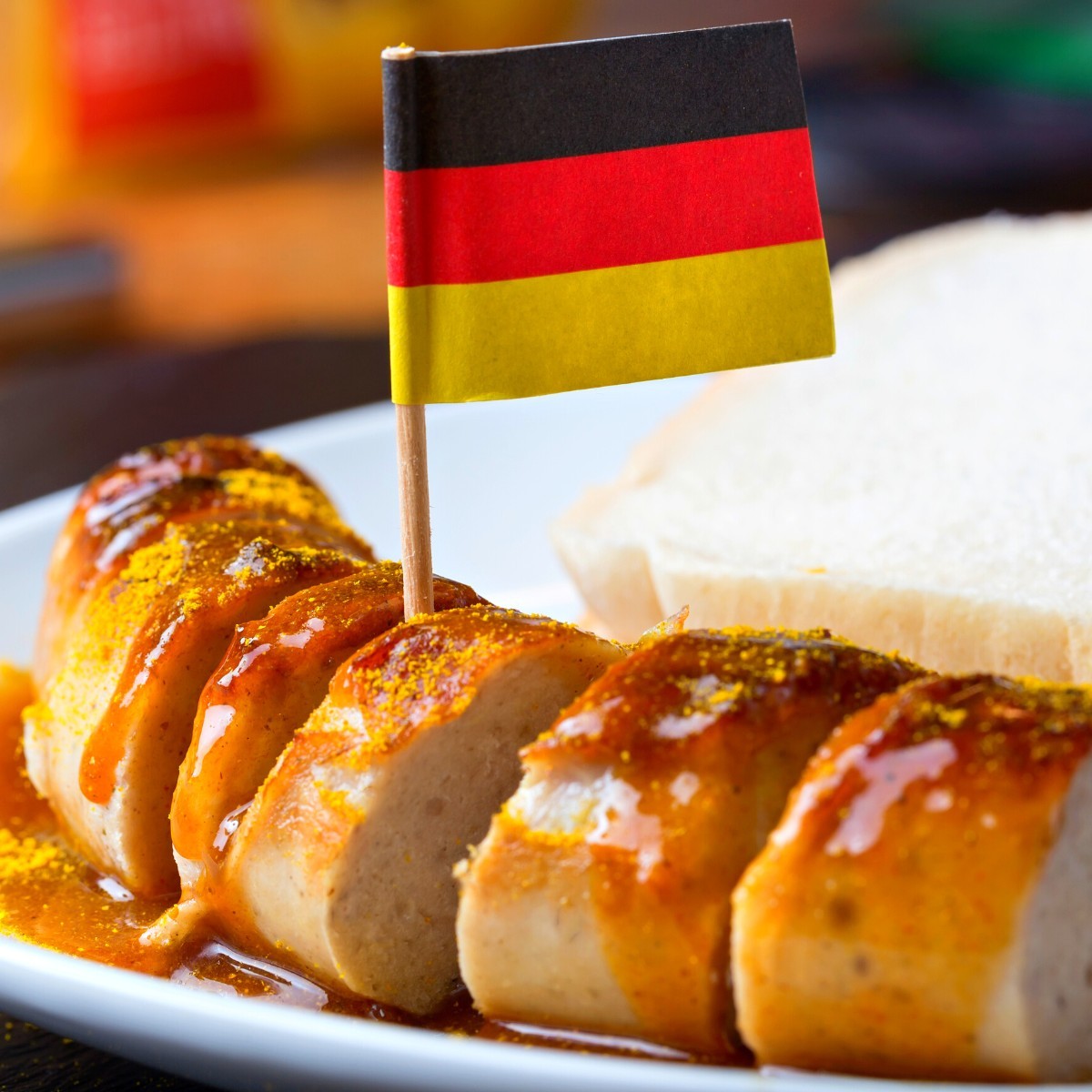 Currywurst fans, listen up! I’ve spent a lot of time perfecting my currywurst recipe because I’m a skilled cook who loves spicy and flavorful foods.

I’ve made so many delicious sausage dishes, like beer bratwurst, air-fryer brats, and Polish kielbasa, that I’m almost like a sausage sommelier. Or, at the very least, a self-proclaimed sausage fanatic. In any case, I’m confident in my ability to turn usual meats into delectable sausages worthy of a foodie’s standing ovation. 🙂

Currywurst is a German fast food dish made of steamed, fried sausage slices smothered in a curry-flavored ketchup sauce. It is a popular street food in Germany and is usually served with fries.

But, let’s be honest, currywurst is so much more than a fast food product. It is a cultural icon and a source of culinary pride for Germans. In fact, there was even a currywurst museum in Berlin (yes, you read that correctly). However, it was closed in 2018.

The story goes that Herta Heuwer, a smart housewife from Berlin’s Charlottenburg district, was the one who came up with currywurst. She reportedly made a deal with British soldiers stationed in the area in 1949. She gave them alcohol in exchange for a mixture of ketchup (or plausibly Worcestershire sauce) and curry powder.

People say that Herta played around with these ingredients and other spices until she found the right mix, which she then put on pork sausages that she grilled. And that’s how currywurst came to be.

Herta started selling this tasty and cheap snack on the street, and it didn’t take long for it to become popular. People went crazy for the strange taste, especially since spices like that were hard to come by at the time. Currywurst was very popular with the construction workers who were rebuilding the city because it was cheap and full of protein.

Some people say that Lena Brücker invented currywurst in Hamburg in 1947. No matter who had the idea first, it’s clear that Herta Heuwer was a big part of what made currywurst the popular dish it is today.

You can see this 2008 German movie titled “Die Entdeckung der Currywurst” which translates to The Invention of the Curried Sausage, which follows the post-war life of Lena Brücker.

Herta passed away at the ripe old age of 86 in 1999. To memorialize her memory, a plaque was put in 2003 at the intersection of Kant and Kaiser Friedrich Streets, where her original kiosk once stood. 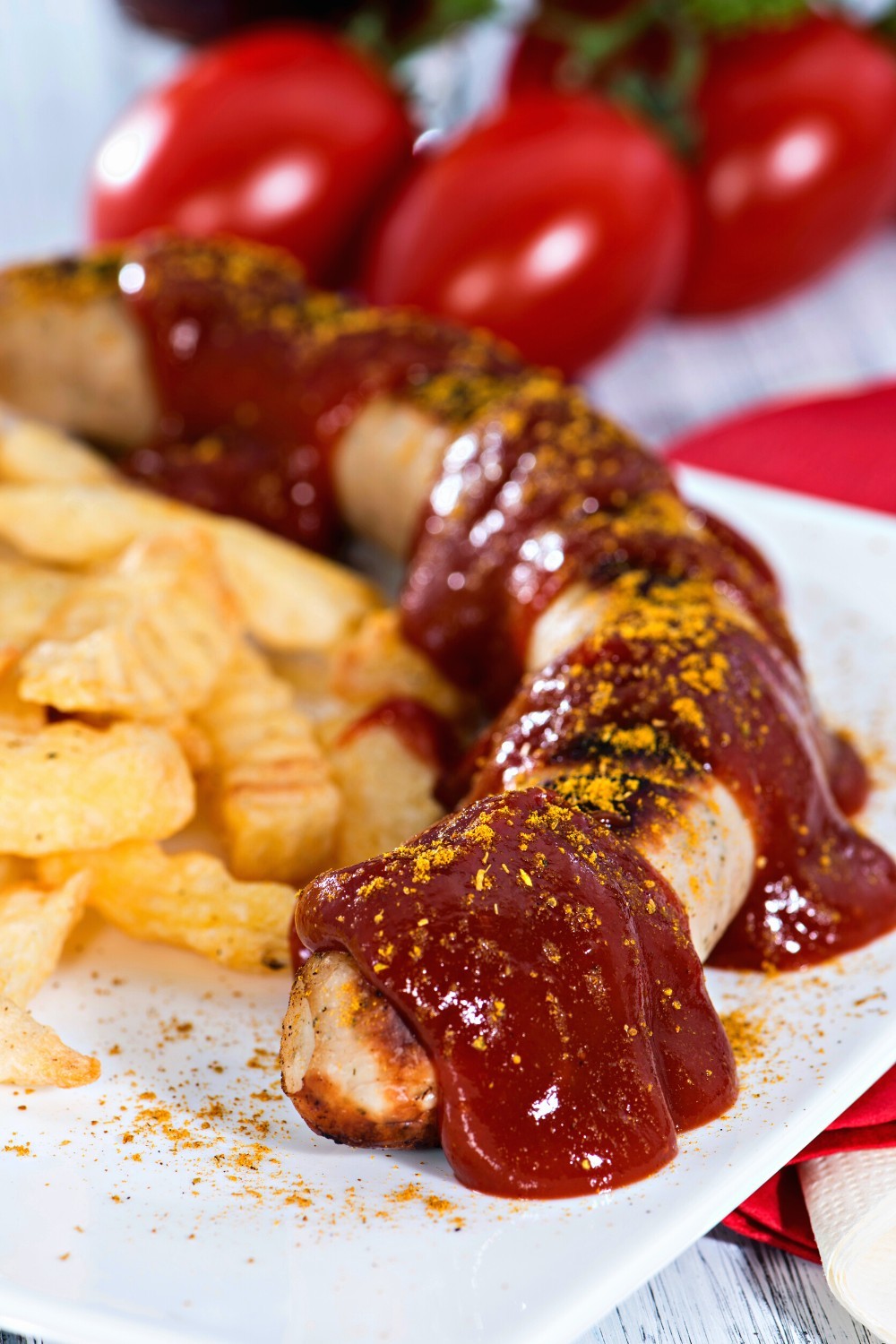 Ketchup: the type of your ketchup is crucial. I advise you to go for organic ketchup to get the most flavors. If not, use the one you have at hand.

Chicken broth: you can also use vegetable broth

Vegetable oil: for softening the onion

Sugar: We suggest dark brown sugar because it imparts a flavor similar to caramel.

Mustard: Use either ground mustard seed or prepared yellow mustard

Apple cider vinegar: you can also use white wine vinegar

How to make Currywurst

Step 1: Start by heating up some oil in a small saucepan. This is the first step in making tasty Curry Ketchup. Once the oil is heated, add some onions and cook them until they are soft and clear, being careful not to let them brown.

Step 3: Lastly, stir in the rest of the ingredients and bring the whole thing to a simmer. Turn the heat down to medium, cover the pan, and let the ketchup simmer for 15 minutes while you stir it every now and then.

When the time is up, use a blender or a stick blender to puree the mixture until it is smooth. Let the ketchup cool all the way down before putting it in the fridge for at least a day to let the flavors develop. After that, you can store the Curry Ketchup in the refrigerator for up to a month.

Step 1: Start by simmering the sausages in lightly salted water until they are cooked all the way through.

Step 2: Grill or pan-fry the sausages until their outsides are brown and crispy. (Some people like to cut small holes in the sausage, so it doesn’t burst while it’s cooking. The sausage is then cut into bite-sized pieces before being served.)

Step 3: To serve, pour curry ketchup on top of the sausage and garnish curry powder on top. Eat with currywurst toothpicks and French fries or a crispy bread roll.

Step 1: Heat your air fryer for 5 minutes at 360°F to prepare it. Put your sausages in a single layer and leave some space between them, so they cook evenly and get a nice brown color.

Step 2: Cook them for 12 to 15 minutes or until the temperature inside is at least 160°F. Due to the higher fat content of bratwurst, you can cook them to 190°F. 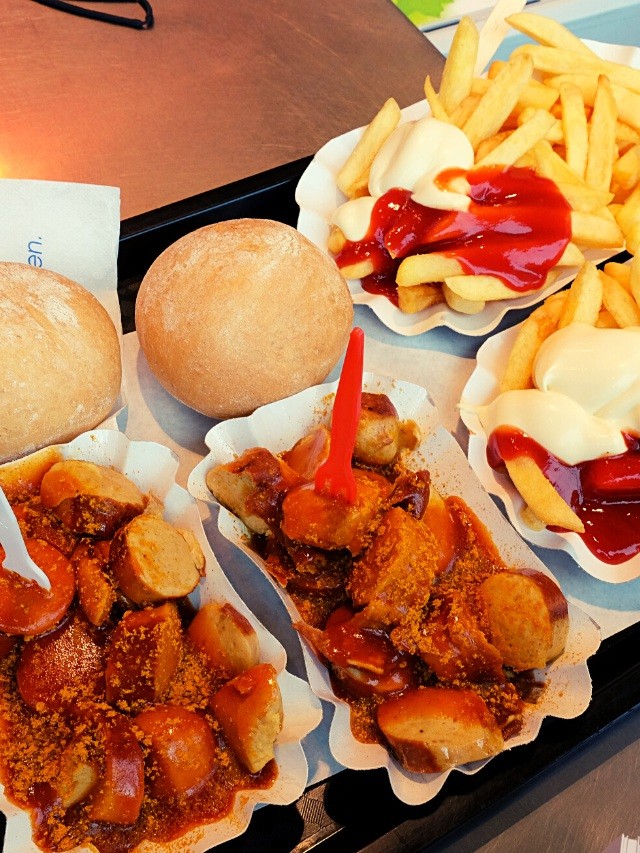 Our recipe for currywurst is sure to satisfy your taste buds. Picture a perfectly cooked sausage that has been grilled or fried and is covered in a spicy ketchup that tastes like curry. It’s the best way to combine sweet and spicy flavors, and it’s easy to make at home.

If you’re a currywurst fan, you should save the image below to your Pinterest board! However, don’t simply take our word for it; try it for yourself and see how yummy it is. Just don’t criticize us if your coworkers come asking you to bring it in every day for lunch. 🙂