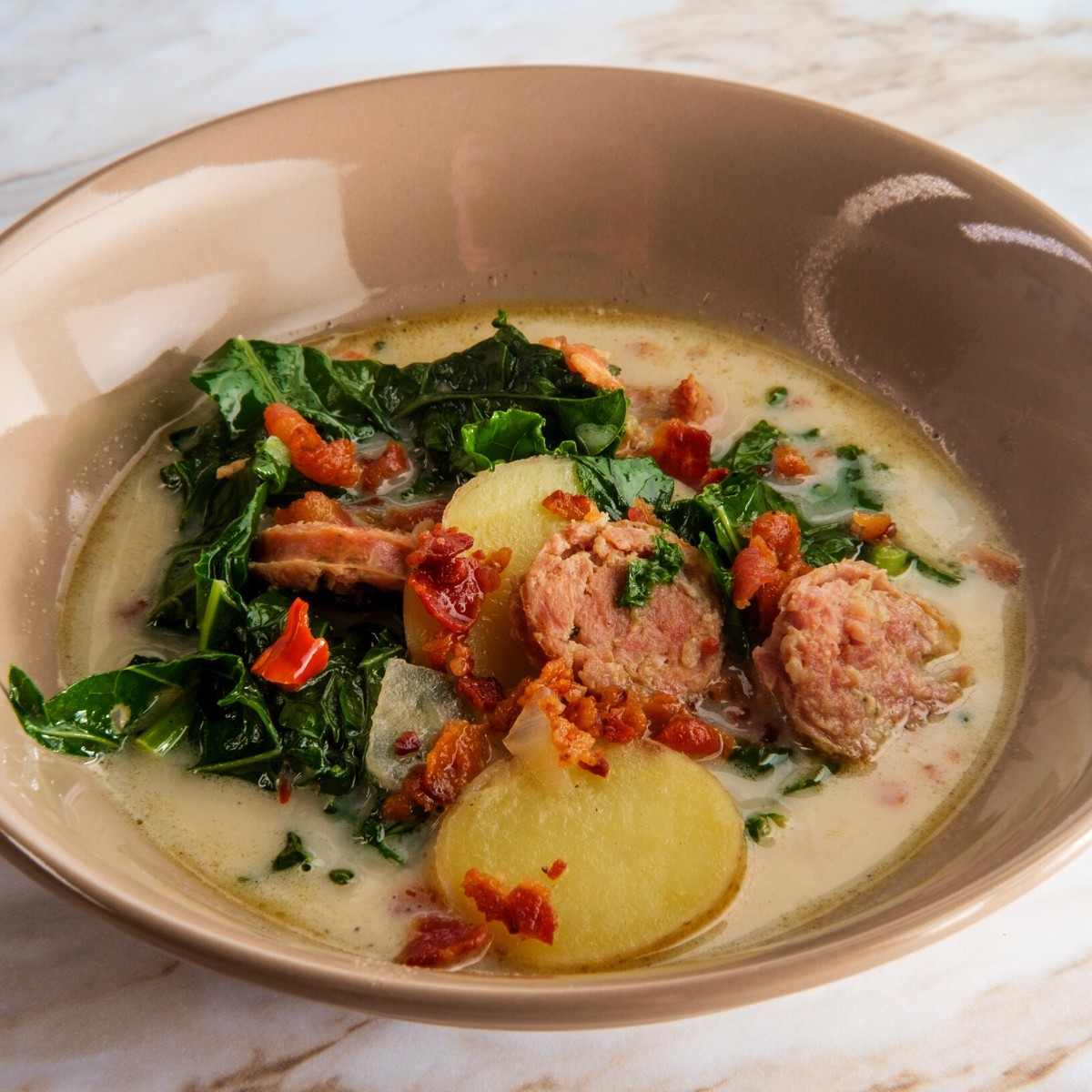 A copycat of Olive Garden’s famous Zuppa Toscana soup that matches the restaurant’s classic in every way. A creamy and flavorful broth was infused with kale, bacon, Italian sausage, and tender pieces of russet potatoes.

What is Zuppa Toscana?

Toscana means Tuscan, and Zuppa means soup. So, Tuscan Soup! The traditional ingredients include kale, potatoes, onion, and garlic, and it is then topped with cheese.

When you taste it, you’ll realize why it seems so wonderful. It’s fantastic!

Fun Fact: When the first Olive Garden debuted in Orlando, Florida, it quickly became a popular dining destination. Rapid expansion led to revenues that eventually equaled those of Red Lobster. 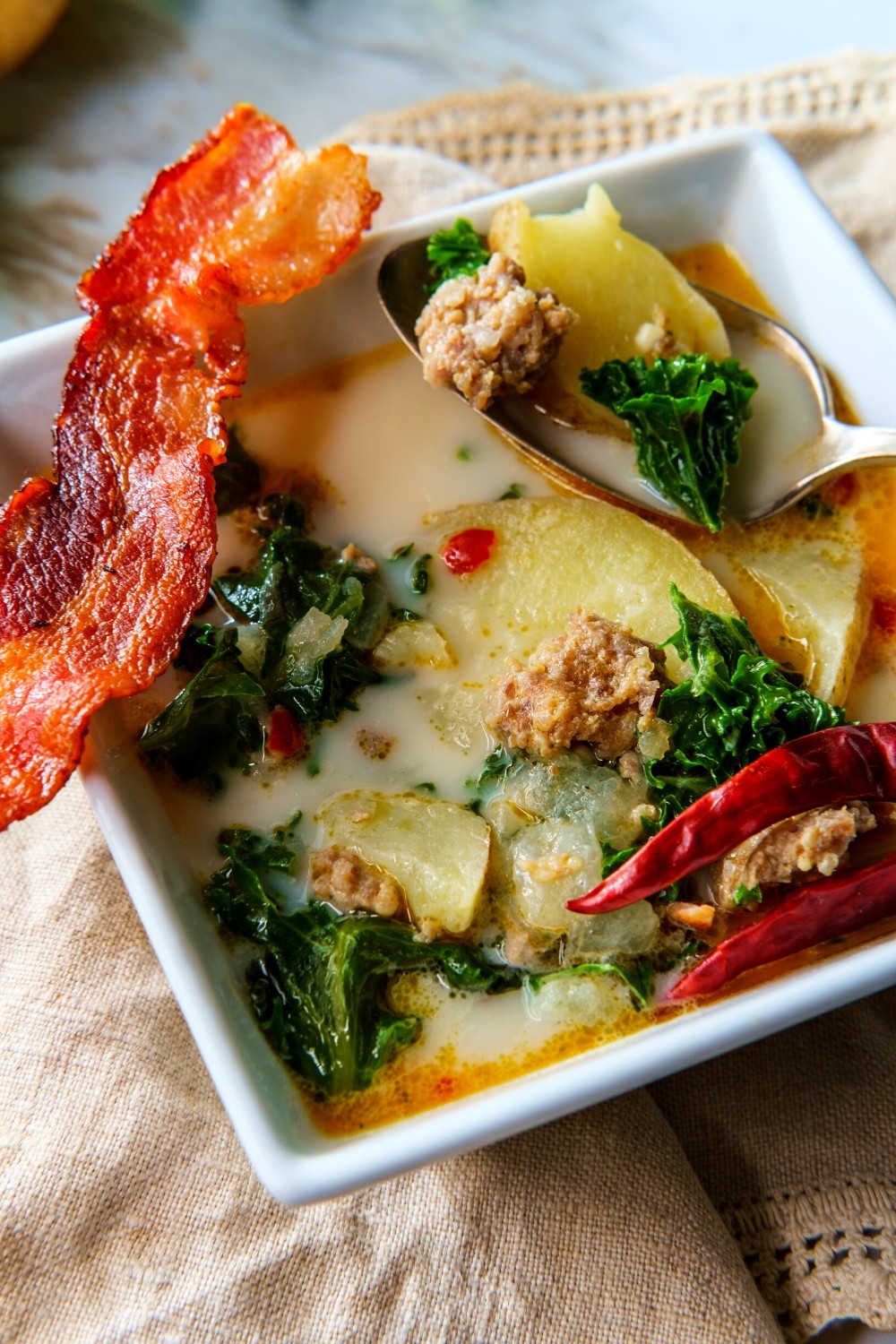 This soup relies on a short list of basic ingredients. However, the final product is so spectacular that you’ll want to lick your dish clean. The recipe card contains the whole list of ingredients and preparation steps.

Sausage: Spicy Italian sausage adds a ton of flavor to the broth.

Bacon: You can leave out the bacon if you prefer, but I never make it without bacon.

Russet potatoes: Keep the skins on while cooking potatoes to prevent them from disintegrating.

Kale: You don’t need a ton of kale, but if you want it to be more healthful, you can add more because it’s an ideal vegetable for this soup.

Garlic: For added taste, I recommend using a garlic press instead of chopping it by hand and adding it to the soup.

Chicken broth: A base for the soup.

Heavy cream: not a lot is called for, but it’s essential for that velvety broth texture and taste

Parmigiano Reggiano: get a block of this when you go grocery shopping; it’s pricey, but it lasts a long time and tastes much better than anything from a plastic container. Also, keep the rind and add it to your favorite red sauce as it simmers for even more flavor.

Salt and pepper: For the flavoring

Olive oil: for frying the garlic and onions 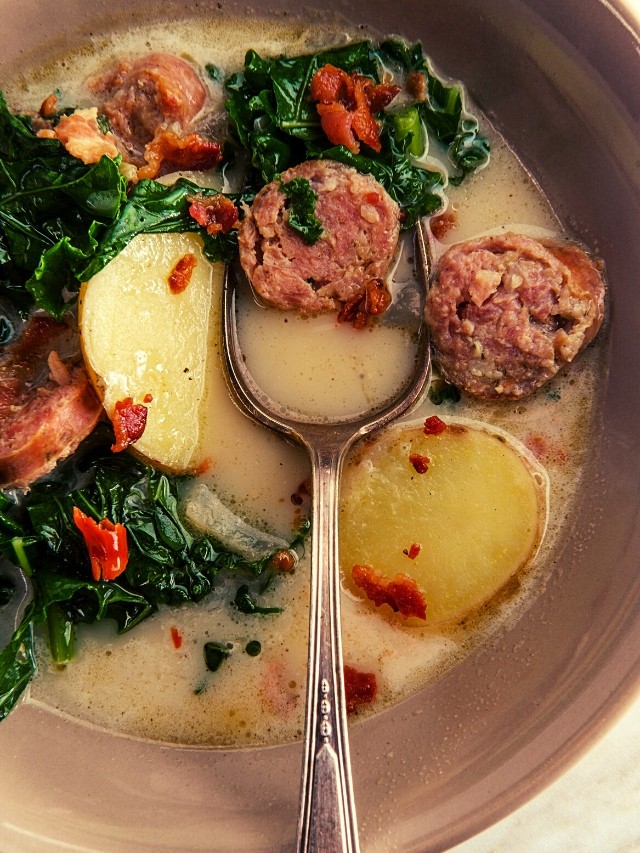 How to make Zuppa Toscana

Step 1: Sauté chopped bacon in a large pot or dutch oven over medium heat until browned (6-7 mins). Transfer bacon to a paper towel-lined plate, and pour out excess oil, reserving about 1 Tbsp.

Step 2: Toss in the Italian sausage and cook it thoroughly by breaking it up with a spatula as it cooks (5 min). Transfer to a paper towel-covered plate.

Step 3: Add olive oil and onion that have been finely diced to the pot. Cook for 5 min or till tender and golden, then add garlic and saute for around 1 minute.

Step 4: Bring to a boil after adding 6 cups of water and 4 cups of broth. Add the potato slices and simmer for an additional 12 to 15 min or until fork-tender.

Step 5: Add chopped kale and cooked sausage when the potatoes are almost done cooking, and then bring everything to a gentle boil.

Step 6: Add 1 cup of cream and heat through. Remove from heat after adding salt and black pepper to taste. Add grated parmesan and bacon as a garnish.

Is Zuppa Toscana Good for You?

This soup is naturally free of grains and gluten. You can use cauliflower instead of potatoes to produce a Zuppa Toscana that is suitable for Keto dieters.

Heavy cream can be replaced with 1 can of full-fat, unsweetened coconut milk to make this dish Whole 30 compliant (dairy-free). Use only the thick, white cream and mix it at the last minute of cooking.

How Spicy is Zuppa Toscana?

You may create a less spicy version of this soup by using medium or mild Italian sausage and seasoning it with salt and pepper to suit; we use “Hot” Italian sausage, which does give this soup a fiery kick.

Italian sausage, bacon, kale, and potatoes fill a bowl of homemade Zuppa Toscana. This recipe for Olive Garden’s famous Zuppa Toscana soup is yours to make.