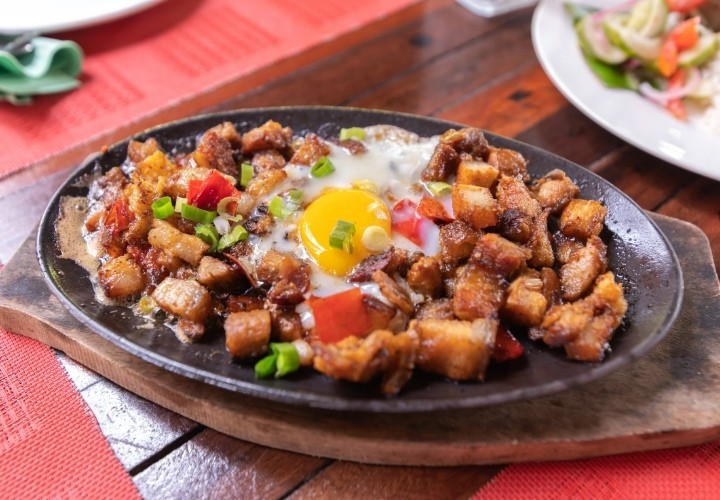 The simplest Sisig recipe you’ll ever prepare! Sisig is the most renowned Kapampangan dish of all time! Have this quick and straightforward Sisig dish with a grilled pig belly! Crispy and hot, exactly how it should be.

What exactly is Sisig?

Sisig recipe is the most iconic Kapampangan cuisine in the Philippines, and it is attracting increasing popularity across the world. You can find Sisig dishes on the menus of most restaurants, and Carinderias which are small food vendors.

This Sisig Recipe is the modernized version of the Sisig most people know. Sisig, a Kapampangan term, means to eat any sour or unripe fruit with vinegar dressing.

Because of the vinegar and/or calamansi juice, it was historically a highly sour meal. Pork or other meat was not incorporated until much later.

Authentic Filipino Sisig recipe is prepared with pig head parts like snouts, ears, jowls, cheeks, and (believe it or not) pig brain. If you’re not a big fan of them or are having difficulty locating such items, this recipe is for you! Here’s what you’ll require: 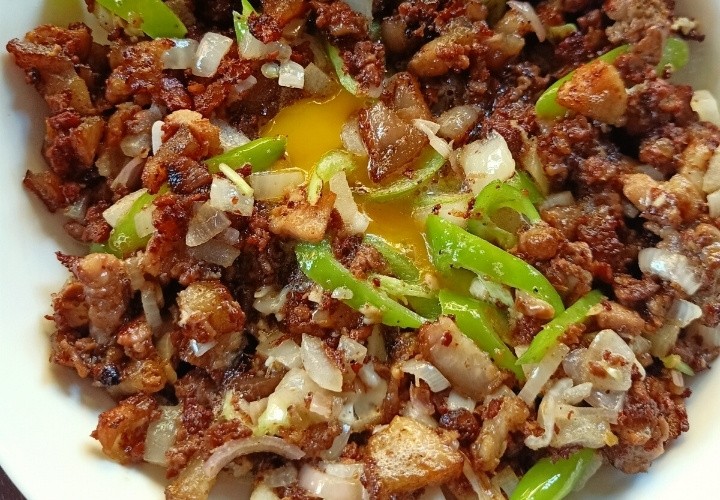 How to Cook Sisig with Pork Belly

Pork belly may be used in two main ways for Sisig. Both methods are simple and involve less work than traditional charcoal grilling.

How Do You Serve Sisig?

Serve Sisig immediately from the pan. Then garnish with additional raw onions and raw egg to make it extremely velvety (radiant heat will fry the egg, don’t panic!) If feasible, move to a hot sizzling plate. I usually use a cast iron pan that doubles as a serving dish. It kept the heat far longer than a typical steel pan. Serve with rice by itself or with beer or your preferred ice-cold beverage.

What are the storage and shelf-life requirements?

Keep the leftovers in an airtight container in the refrigerator for 3 to 4 days. After that, freeze in a sealed container or heavy-duty freezer bags to prolong the shelf life. Thaw completely before cooking on the stove or in the microwave.

You may use raw chicken liver instead of liver paste.

To get ready: Season with pepper and a touch of salt before cutting into serving pieces and pan-frying until done but still soft. Avoid overcooking. Shred it with a fork, then put in the remaining sisig components shortly before the spices.

What’s the difference between Traditional and Modern Sisig Recipe?

Sisig was adapted and evolved into what it is now because of the inventive thinking of Lucia Cunanan, a.k.a. “Aling Lucing,” who served it in her Angeles City Carinderia. She devised a means to repurpose the pigs’ heads that would otherwise be discarded by the distribution centers that made food for the American soldiers when they were stationed at Clark Airbase.

It quickly became famous as “pulutan,” or beer food, at this late-night establishment. Later, a competitor, Benedicto Pamintuan, suggested presenting it on a sizzling platter. Not to be outdone, Aling Lucing began to feed her Sisig in the very same fashion.

In Pampanga, it is also commonly served as a side dish with rice. However, as a “pulutan,” it is typically served on a sizzling platter and adorned with a raw egg in other localities.

Nowadays, there are many variants of the original pork Sisig, such as chicken Sisig, tuna Sisig, and squid Sisig, to mention a few. I’ve tasted many types of Sisig from all throughout the country.

I hope you’ve enjoyed this Filipino Sisig Recipe. If you follow my blog, you can see the pattern of me posting more and more Filipino recipes, and no wonder, they are amazing. Please let me know if you have any questions or suggestions about this Sisisg recipe down in the comments section, and I will reply. Thanks!