You want more after every bite because it melts on your tongue. So don’t be afraid to try our cinnamon rolls and experience a whole new level of delicious cinnamony delight.

The cream cheese frosting on top and the cinnamon sugar filling offers the ideal amount of tang and sweetness. Once you’ve had a mouthful, let me tell you that it’s difficult to resist reaching for another roll.

They are also ideal for any special occasion in addition to weekend breakfast or brunch. You have the option of serving them plain or with a variety of toppings, warm or cold. These rolls will definitely “wow” the crowd and steal the show, I promise, just like this Italian Maritozzi sweet buns recipe, which was an instant hit on social media.

Why you’ll love this recipe

The ideal balance of the ingredients is key. It feels as though the brioche dough is dancing in your mouth because it is so light and airy, like a fluffy cloud.

When combined with the dough, the cinnamon sugar butter spread adds the ideal amount of sweetness and a touch of warmth.

Besides brioche dough, cream cheese frosting is the star of this recipe, so don’t forget about it. It’s a party in your mouth, it is so creamy, rich, and decadent. The combination of flavors and textures in this recipe is like a symphony, and you’ll want more.

Let’s face it, who doesn’t enjoy a tasty party in their mouth?

Butter: Butter gives a recipe taste and texture. Prior to baking, it must be removed from the refrigerator so that it can come to room temperature and soften.

Yeast: Yeast is a leavening agent that gives the dough a distinct flavor and helps it rise. For optimal results, I advise using fresh yeast; however, active dry yeast can be used in its place.

Whole milk: Whole milk helps the yeast grow and hydrates the dough. The temperature should be raised to 98 F (37 C), as that is where yeast grows best. It’s crucial to avoid heating the milk to a point where the yeast is killed.

Brown sugar: Brown sugar has a distinct caramel flavor note and is used to make a dish sweeter.

Cream cheese: Frosting is made from the cream cheese. Before creating the frosting, it should be taken out of the fridge to come to room temperature. This will guarantee a creamy and smooth consistency.

Don’t forget to refer to the recipe card for a detailed list and exact measurements of all ingredients!

How to make Brioche Cinnamon Rolls

Step 1: Heat the milk until it’s just about body temperature (about 98 F). Put some crumbled fresh yeast into a mixing bowl. Pour the warm milk in and stir everything together until the yeast is dissolved. If you’re using dry yeast, follow the instructions on the package to get it to activate.

Step 2: Next, we’ll include all-purpose flour, granulated sugar, eggs, and a pinch of salt. Mix everything together with the dough hook on low to medium speed until the dough is completely wet and there is no dry flour left. Then, mix on medium speed for another 4 minutes.

Step 3: Now is the time to add butter! Perform this step in two parts. After the first part is fully mixed into the dough, add the second part. Even though it might look a little messy, don’t worry. Once the second part is mixed in, scoop down the sides of the bowl and proceed to mix for 8 to 10 minutes or until the dough is smooth and pulls away from the bowl.

Step 4: Last, we’ll put the dough in a clean bowl that has a thin layer of vegetable oil on it. Wrap the bowl in plastic wrap and a tea towel, and put it in a warm room for an hour to let the dough rise.

For the filling and assembly

Step 1: Let’s make the filling while the dough is rising. Mix all the ingredients together until they form a paste. Put it aside.

Step 2: Once your dough has doubled in size, roll it out on a lightly floured work surface into a large rectangular shape that is about 5 mm thick. Spread the cinnamon sugar filling out equally, and roll the dough into a log.

Step 3: Cut off the unequal ends of the log using a piece of string or unflavored dental floss and cut it into 12 rolls. For this, you can also use a serrated bread knife.

Step 5: Once the cinnamon rolls have risen, bake them for 22 to 25 minutes on the second lowest rack. Cover the rolls with aluminum foil for the last 5 minutes of baking to keep them from getting too brown.

Step 1: Using a hand mixer, mix butter and cream cheese for 1 minute in a bowl. Sift in powdered sugar and add in vanilla extract. Mix everything until it’s smooth and well-blended.

Step 2: Spread the frosting on the warm brioche cinnamon rolls and enjoy! 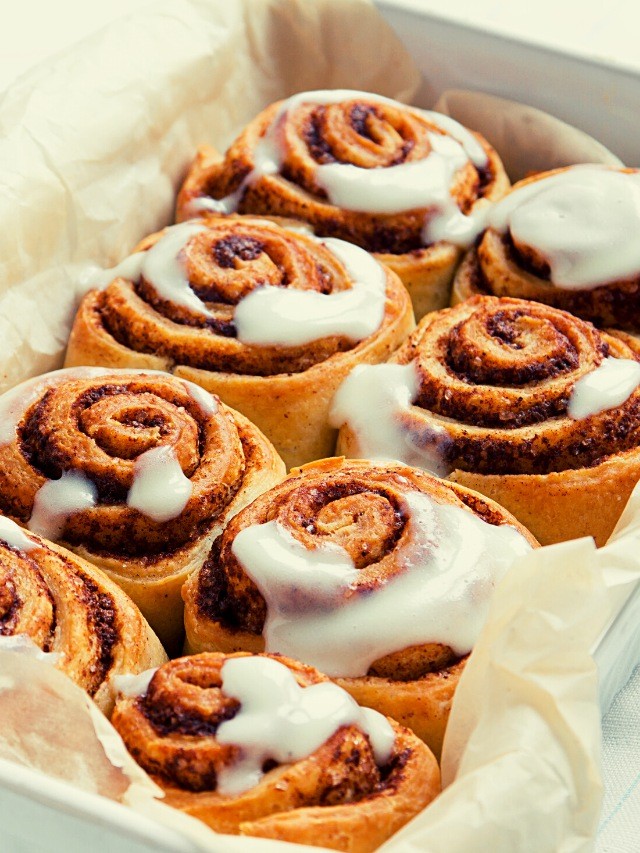 Can I make these ahead?

You can easily prepare all the parts the night before, so all you have to do in the morning is put them together and bake them. Mix the dough as directed, then whip up your cream cheese frosting and put it in a sealed container in the fridge.

For the cinnamon sugar filling, mix the ingredients together and store them in an airtight container at room temperature. So all you have to do is put the rolls together and bake them, and voila, brioche cinnamon rolls are being served!

Delicious, fluffy brioche cinnamon rolls will make your mouth explode with flavor. After just one bite, you’ll be hooked and eat roll after roll without stopping. You’ll wonder if you’re in pastry heaven when you try the gooey cinnamon sugar filling and cream cheese frosting.

To fill and assemble.

Baking the rolls to Perfection

Don’t keep these yummy brioche cinnamon rolls to yourself! Share the image below on your Pinterest board and make your friends drool. 🙂