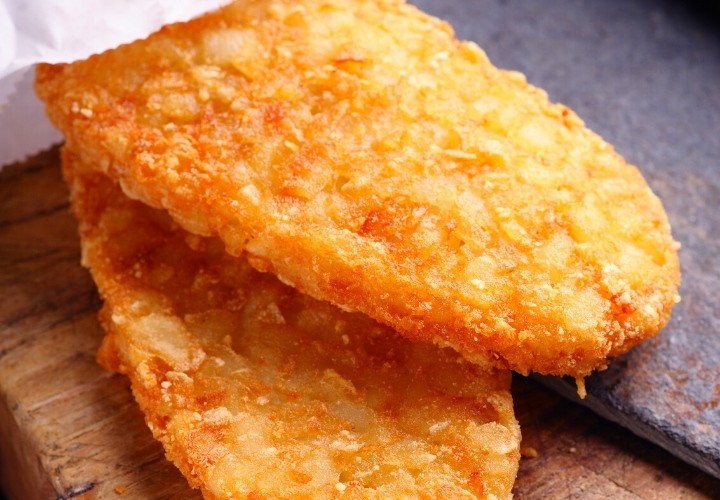 It is time for another McDonald’s copycat recipe. After making these delicious Egg McMuffins, and Chicken McGriddles, we’re making McDonald’s hash browns this time. These mouthwatering hash brown patties made from shredded potatoes are cooked to be fluffy inside and crispy and toasted on the exterior.

Since no other recipe even comes close to the original and, in my opinion, doesn’t merit the moniker “Copycat recipe,” the primary cause is wrong or missing ingredients. This recipe has been waiting patiently to be published.

Thus I’ll walk you through the process of making these hash browns in the McDonald’s way today. The best part about them is that you can prepare them ahead of time and freeze them for whenever you’re ready to cook them.

I’m not sure about you, but I consider McDonald’s hash browns among their most delicate items. They’re great in the restaurant, but I think my version is much better when it’s cooked at home!

Once you try these easy and delectable homemade hash browns, you’ll be addicted. That has certainly been the case for me. So far this week, I’ve cooked these for breakfast nearly every morning.

Making these McDonald’s hash browns at home is also great because no harmful ingredients are added, which I appreciate. My meal should not contain anything like sodium acid pyrophosphate or hydrogenated soybean oil!

The original McDonald’s hash browns don’t contain any cheese, cayenne pepper, or other additives. Still, I see most, if not all online versions that do—missing essential flavors, such as those from beef stock and a little sugar. But don’t worry; you’re going to create something genuine.

The second item that appears to be ignored by everyone is confit cooking. Cooking anything in fat or oil at a reduced temperature is known as confit cooking. Because it changes the starch within, most restaurants “double fried” their potatoes.

As a result, it becomes even crispier when you re-fry it after chilling. Confit, indeed, yep. 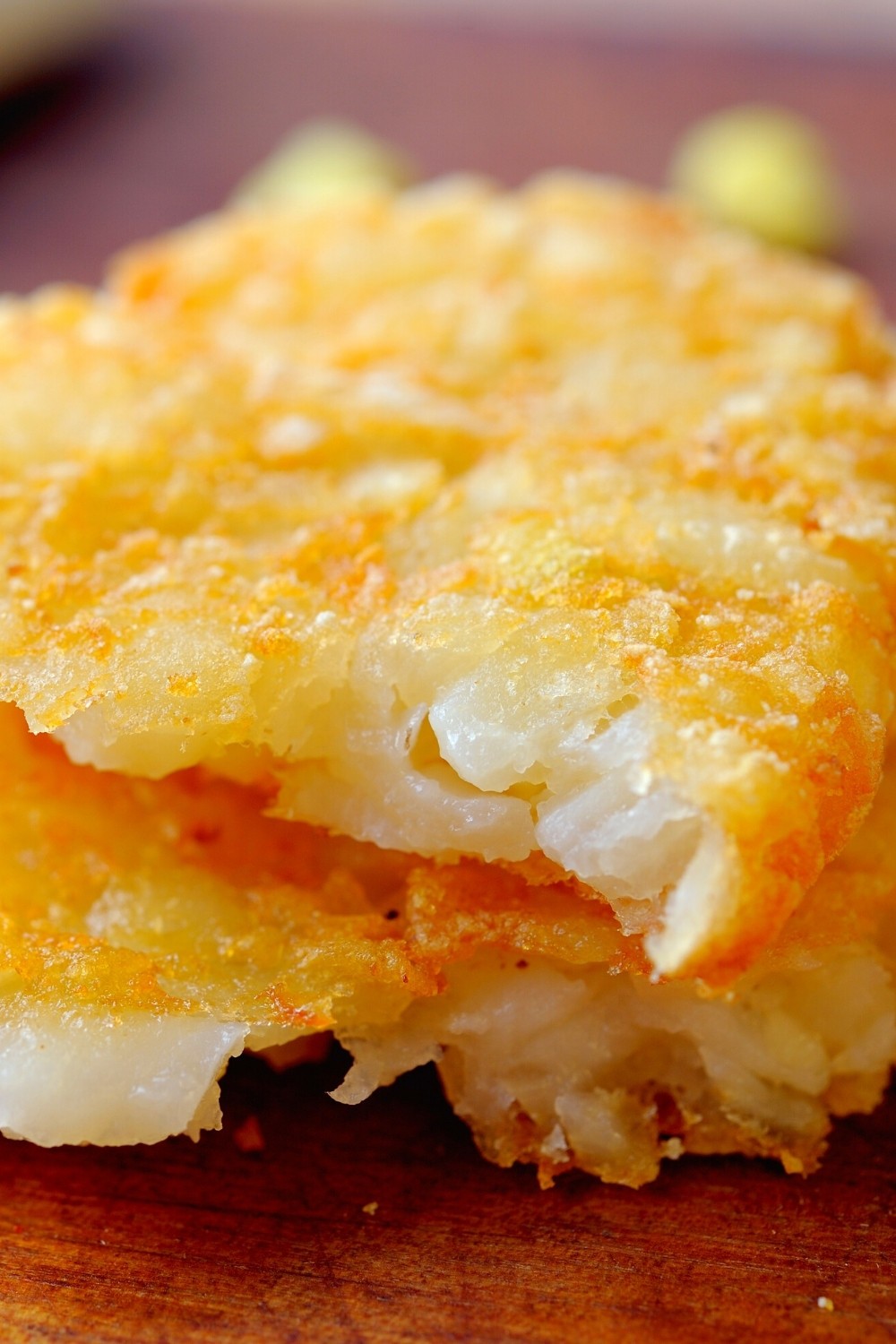 Okay, to prepare these delectable McDonald’s hash browns, you just need some basic ingredients. And while this recipe calls for a few more ingredients compared to standard hash brown recipes, they are more than worth it.

Here is all you will need to prepare this simple hash browns recipe:

Since Yukon potatoes have excellent consistency, I occasionally use them to create hash browns, but any potato would work in this recipe. Because the original recipe calls for russet potatoes, I’ve included them.

Regarding the oil, McDonald’s uses a blend of rapeseed and sunflower oils. Any neutral high-heat oil, such as canola oil, avocado oil, peanut oil, or macadamia nut oil, can be used.

Once more, making a homemade hash brown that tastes like the one from McDonald’s couldn’t be simpler. To make them, you only need to follow a few simple steps. And the steps in the procedure are basicaly peeling, grating, straining, shaping, and frying.

You’ll find this recipe incredibly straightforward to create, even if it’s your first time cooking hash brown patties from scratch. And, to be honest, once you’ve prepared these hash browns, cooking them again and again, will be simple.

Now, let’s start with the recipe and quit wasting time!

The potatoes must first be peeled and placed in a dish of cold water to prevent browning. Use a box grater’s big hole to shred the potatoes. Fill the bowl with cold water, then stir the potatoes well. Drain off the water when it becomes cloudy.

Then, move the chopped potatoes to a mesh sieve or strainer and squeeze them to remove most of their extra liquid. 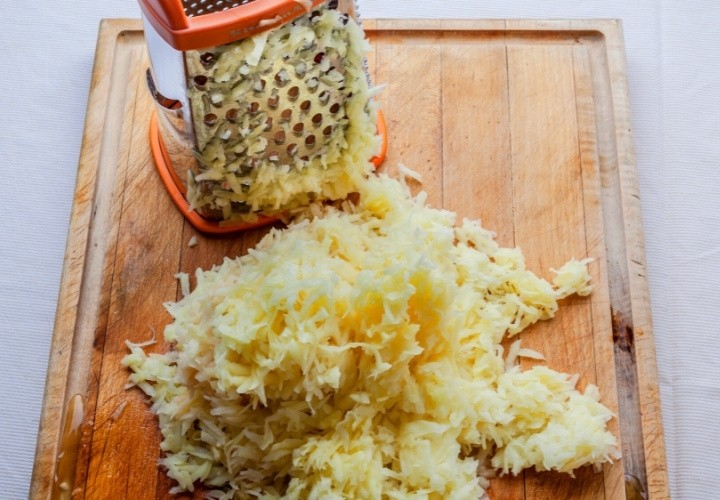 To get the restaurant quality hash browns, I advise you don’t skip this step.

A non-stick skillet should be heated at low heat. Add the potatoes to the hot oil and cook them for 5 to 6 minutes. Before continuing, strain the potatoes and let them a little period of cooling.

Step 4: Combine the ingredients and form the hash brown patties.

Combine the potatoes in a bowl with the sugar, cornstarch, dry beef stock powder, salt, and pepper—Transfer 1/4 cup of the hashbrown mixture on a piece of parchment paper afterward.

Make a rectangle out of the potatoes by flattening them. Add another 2-3 tablespoons of the potatoes on top, then fold the parchment paper over the top to help create the patties.

Repeat these final two procedures with the remaining hash brown mixture until you have about four large patties.

Next, add the oil to a nonstick skillet and heat it over medium-high heat. After that, add the hashbrowns and fry them there for a few minutes on each side or until golden brown.

How To Store Hash Browns

You are aware by now that this McDonald’s hash browns recipe yields around four patties. Don’t worry if you can’t eat them all or decide to double the recipe since they really keep nicely.

You may keep the cooked hash browns in the refrigerator for up to 5 days in an airtight container. By the way, you can freeze the hash browns for up to 10 months if you want to store them for even longer. Just make sure the bag is freezer-safe. This is the approach I normally take. I usually prepare an extra batch of these McDonald’s hash browns since I like preparing and eating them so much. The excess batch is simply frozen, so it’s available anytime I need a quick side for breakfast.

In any case, I advise using parchment paper to line each patty in order to keep them from adhering or disintegrating. 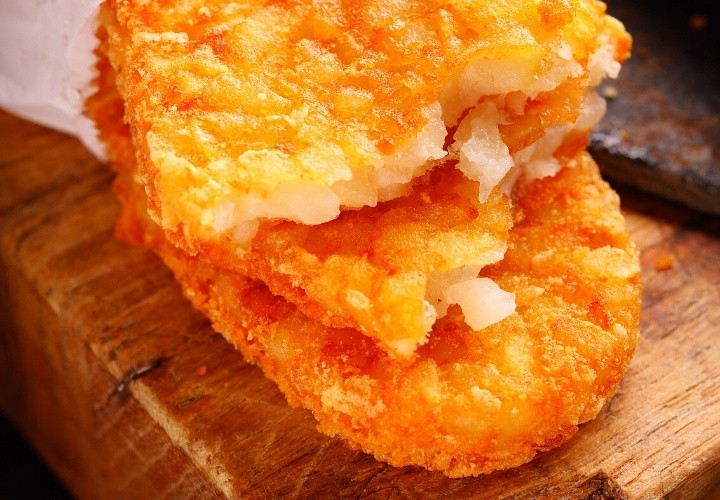 The simplest method to reheat hash browns is to put them in the microwave and cook them for 20 seconds at a time until well hot.

Alternatively, you may bake your hash brown patties at 350°F for 15-20 minutes, or until they are well cooked, on a baking sheet coated with parchment paper or foil. This is the best approach if you want them to crisp back up.

There is no way that this hash brown dish could be any more authentic. Every bite has the same deliciousness you adored every time you’ve eaten at McDonald’s, and the outside’s crisp crunch, buttery middle.