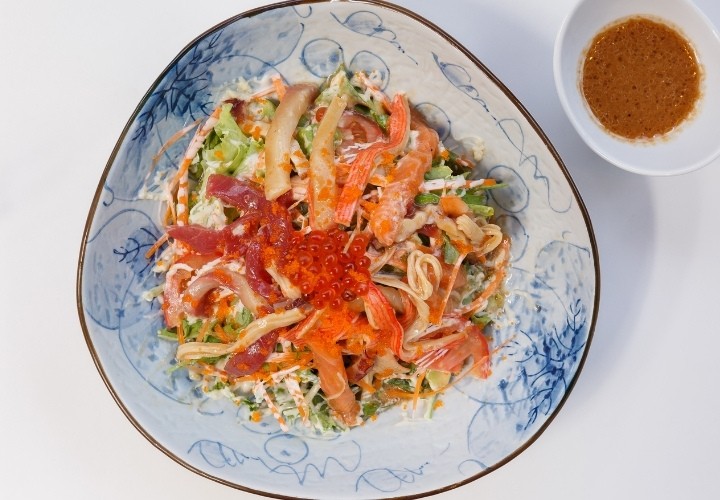 Today we’re going to make Japanese easy Kani Salad recipe.  Kani Salad is very refreshing with a sweet touch of ripe mangoes in contrast to the light and savory flavors of Kani and Japanese mayo that is very creamy.

Despite the popular notion, Kani Salad is not a conventional Japanese meal. Like a number of other dishes, it really first became popular in the United States. Usually served at Japanese sushi restaurants that spread to other areas of the globe. The key element with this salad is, needless to say, the Kani.

Kani is widely known as a replica of crab meat, usually available in lots of Japanese dishes such as for example sushi. Kani really means “crab” in the Japanese language, and the imitation crab meat that people eat is named Kani Kamaboko or just Kanikami. Regardless of this, Kani is a widely accepted name for imitating the crab meat.

These replica crab meats are produced from white fish such as for example Pollock, made to become a paste called surimi. They are created to taste near to real crab. Each crab stick could be shredded easily and is colored in red, artificially and externally, to imitate the crab’s legs and appearance.

Kani is less expensive compared to crab meat, but, needless to say, mimicking crab can’t compete with the actual crab’s nutrition. These crab sticks could be found at virtually all local food markets, and can be purchased already cooked. It’s used as an element in a variety of Japanese dishes and street foods and is used all over the globe.

Making this Kani Salad really needs simple ingredients. An average Kani Salad contains imitation of crab sticks, lettuce, iceberg, carrot, cucumber, and of course, Japanese mayo. But when you wish to take it to another level, listed below are a few of the things that you can include:

Ingredients you can use with Kani Salad

The recipe for this Kani Salad is extremely easy. The only addition to it is ripe mango to provide it with a richer flavor that’s sweet, and savory with a touch of tanginess.

How to Make Japanese Kani Salad