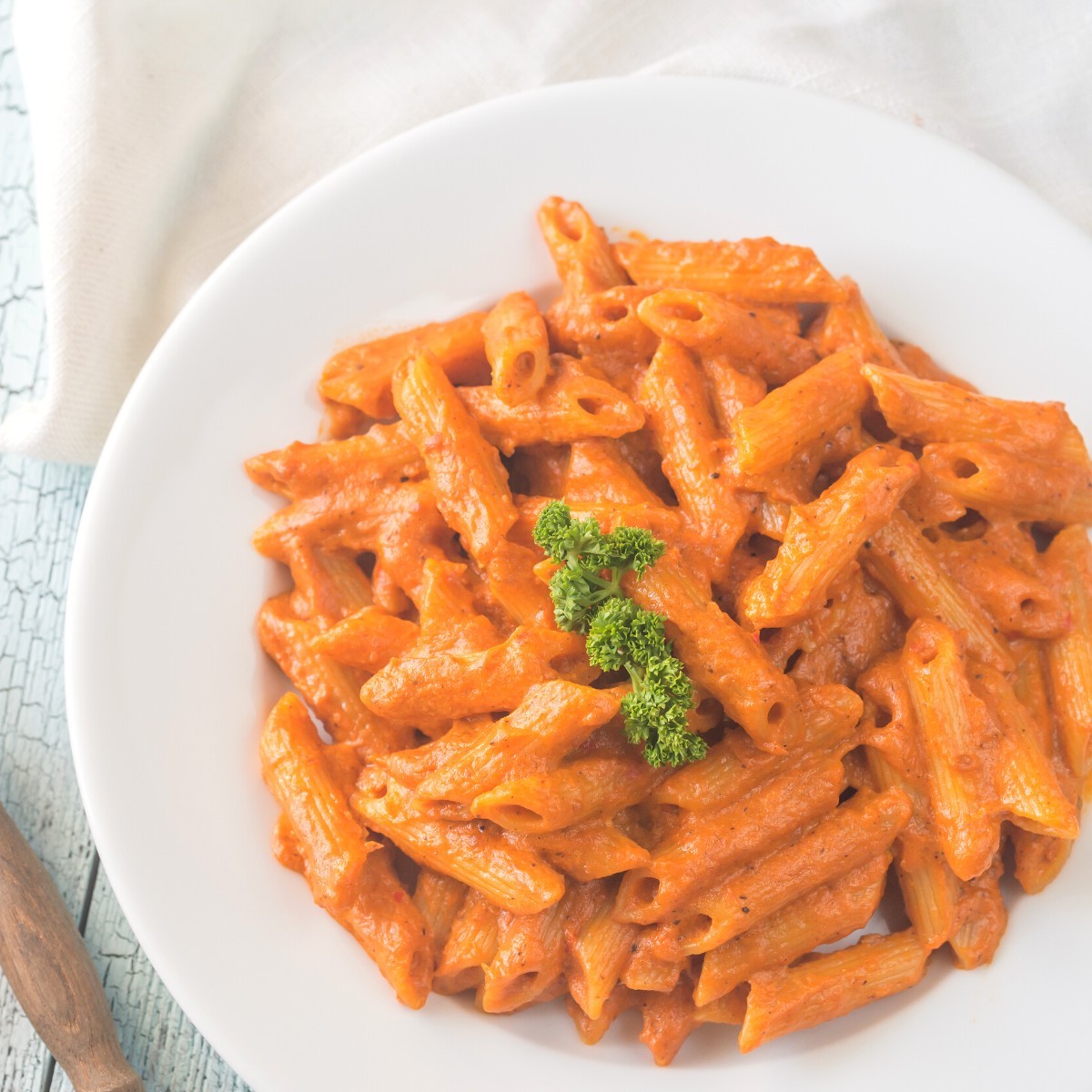 This Gigi Hadid pasta recipe became viral in 2020 and completely took over TikTok and Instagram! Is it worthy of the hype? Totally! This restaurant-quality, spicy, and creamy vodka sauce is so simple to create. I’ll give you Gigi’s identical Instagram recipe and demonstrate how to prepare delicious hot pasta both with and without alcohol.

This Gigi Hadid vodka pasta is irresistible for all the best of reasons. It is exploding with flavor and has just the right amount of heat and sweetness.

This dish is attributed to supermodel Gigi Hadid and offers a delectable twist on regular vodka spaghetti (Penne alla Vodka). In addition, this recipe’s lively, fresh tastes will make it a contender for your go-to pasta dish. How could it not, really?

Al dente pasta with a sauce that is really creamy, rich, and just a little spicy go together nicely in this Gigi Hadid pasta dish. And to add even more umami, hefty amounts of parmesan cheese are sprinkled on top to round off the meal.

I think Gigi took the vodka out of her recipe since she was expecting when she produced the popular video, but she did specify where to put it in the directions.

Oh, and this meal is the epitome of simple if you like PASTA.

Making all of this heavenly pasta takes less than 30 minutes from beginning to end!

Fun Fact: Gordon Ramsay loves Gigi’s cooking.  In 2016, Gordon participated as a judge on the US edition of Celebrity MasterChef, where Gigi competed and was named the show’s champion. Gordon was amazed by her culinary abilities and even praised her burger as “delicious.” 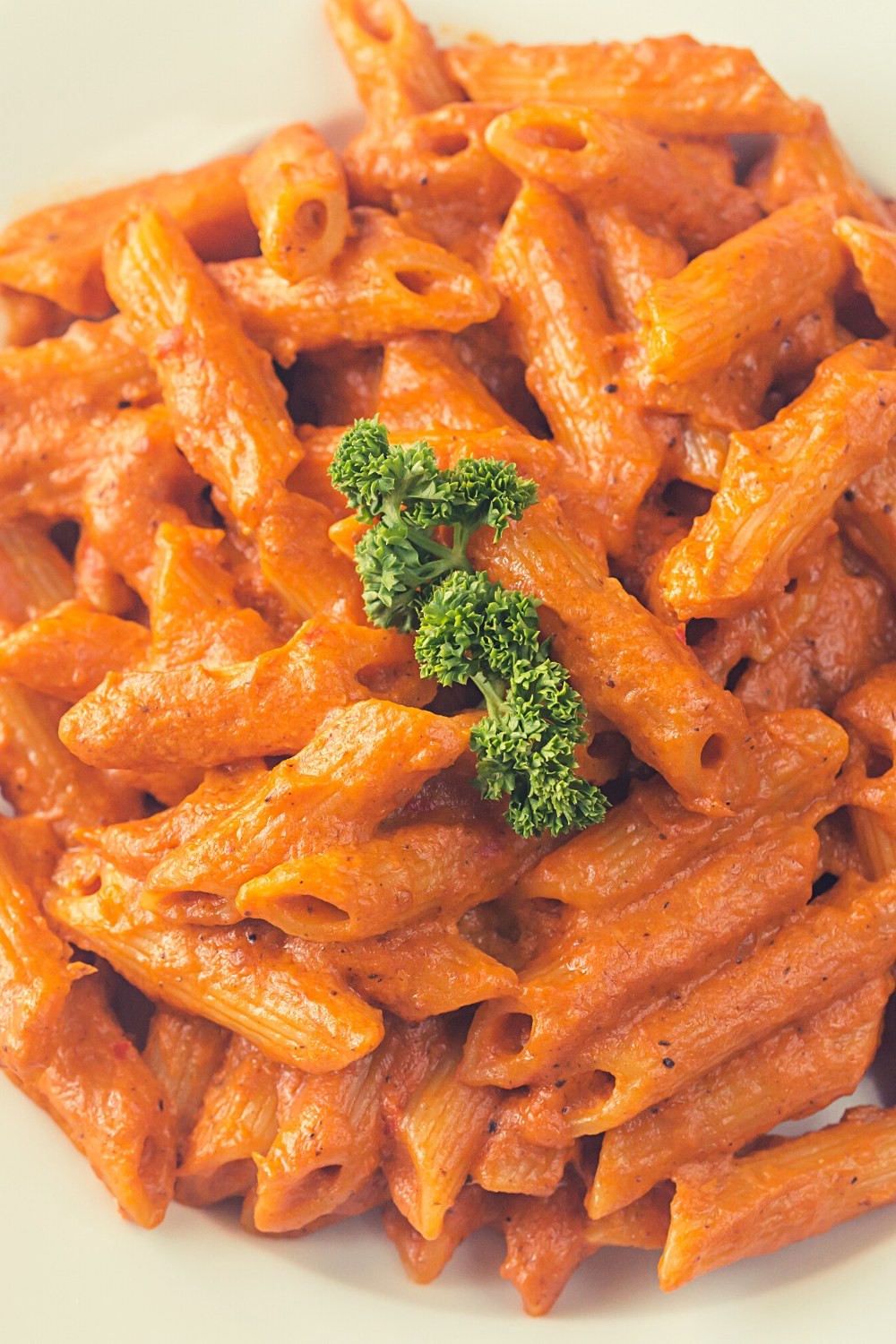 Well, I have 4 good reasons for you: 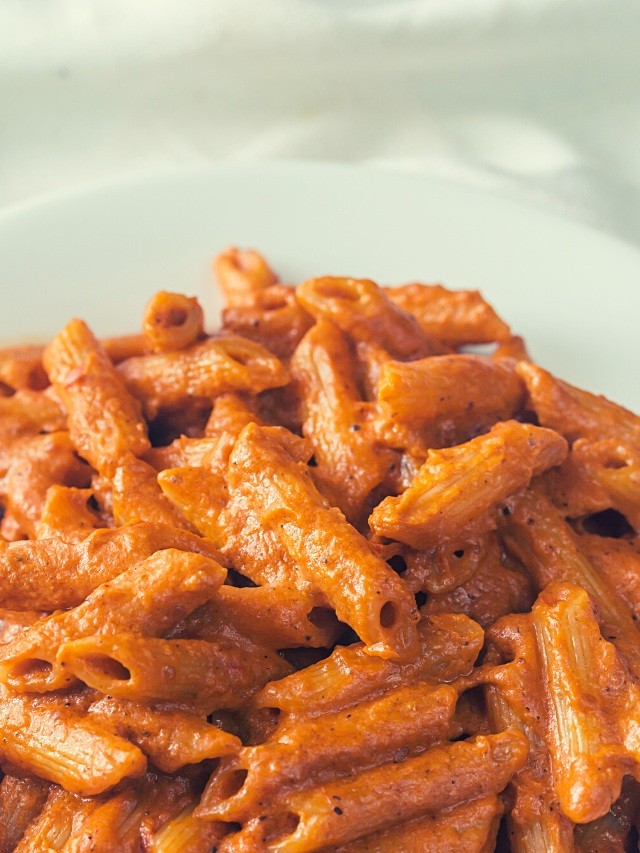 How to make Gigi Hadid Pasta

Always refer to the recipe card below for detailed directions and a list of precise ingredients.

Step 1:  Prepare the pasta as directed on the box. (Don’t drain the pasta until you’ve saved roughly a cup of water). While the pasta cooks, sauté the onion and garlic in olive oil on medium heat.

Step 2: Add in the tomato paste and simmer for several minutes or until it darkens slightly in color.

Step 3: Add vodka and cook just enough to allow the alcohol to evaporate; it should take a minute or two. After that, include pepper flakes and heavy cream. Salt and pepper are used as seasonings.

Step 4: Add in the pasta, the saved cooking water, and butter. Toss the pasta until it is well coated with sauce.

You might also want to try this Creamy Japanese Mentaiko Pasta.

Alternatives to vodka in vodka pasta

There are 3 simple alternatives to vodka in “vodka” pasta:

Eliminate the vodka entirely. If you exclude the vodka, the meal will still be delicious.

White wine or cooking sherry can be substituted for vodka in a hurry if you don’t have any. If using alcohol, you should simmer the sauce until some of the alcohol burns off.

A mixture of Lemon juice and Lime with apple juice: vodka gives just a touch of acidity to this meal, which is subtle yet delicious. This “acid” may be recreated by mixing equal volumes of lemon or lime juice with apple juice.

it’s time for a detail recipe! This vodka cream sauce is restaurant-quality and so simple to prepare! This is Gigi’s identical Instagram recipe, and it can be made with or without vodka!

What are the ingredients for Gigi Hadid pasta?

To create Gigi Hadid’s spicy vodka pasta, you need a handful of basic Italian ingredients, like pasta, olive oil, shallots, garlic, and vodka! And you may add ingredients like mozzarella cheese or remove undesirable ones like garlic.

What type of pasta does Gigi Hadid use?

The original recipe for Gigi Hadid’s spicy vodka pasta calls for shell pasta, but you can substitute whichever pasta you choose! Therefore, you may prepare it with penne pasta, ordinary wheat pasta, whole wheat pasta, linguine, rigatoni, or even gnocchi.

Is Gigi Hadid’s vodka pasta worthy of its reputation?

Yes, it is 100% worth the effort, especially given the fact how easy it is to make it! This restaurant-quality spaghetti is extremely simple to prepare! It is creamy, rich, and made using simple, readily accessible ingredients.

What to add to Gigi Hadid’s pasta?

You don’t need to add anything to this recipe because it’s delicious as it is. However, this recipe would benefit greatly from the addition of grilled chicken or shrimp.