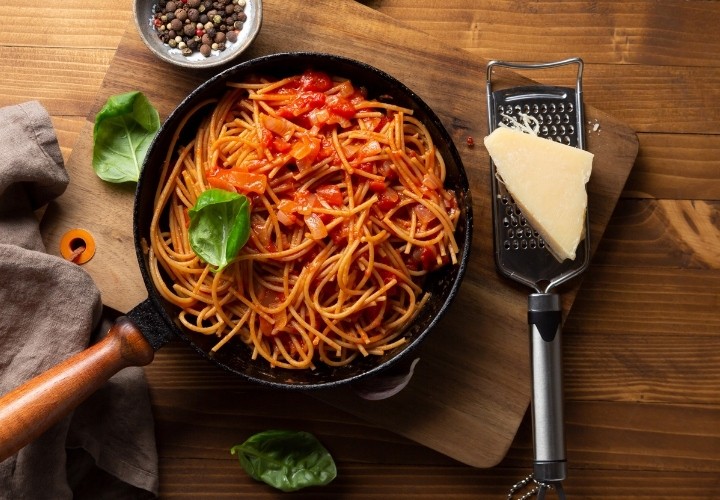 The most fabulous fried pasta meal is this fried spaghetti. Crispy but delicate noodles are topped with a savory homemade tomato sauce and creamy cheeses. It’s a delectable take on a typical spaghetti dish that the entire family will enjoy. And, best of all, it just takes around 30 minutes to put it together!

Fried Spaghetti at its Best

While this is not a “healthy” vegetarian dinner, a bit of what you want now and then isn’t going to hurt you. For example, suppose you enjoy spaghetti but are weary of the traditional boiling noodles and sauce combination. In that case, this fried spaghetti dish is for you.

This fried spaghetti dish is, first and foremost, a comfort food meal. It also is:

All of this with oozy, gooey, cheesy spaghetti parts mixed in with crispy bits? Please, yes! It’s carb and fat nirvana.

Like other comfort food recipes, this dish is inspired by your childhood meals or your heritage. 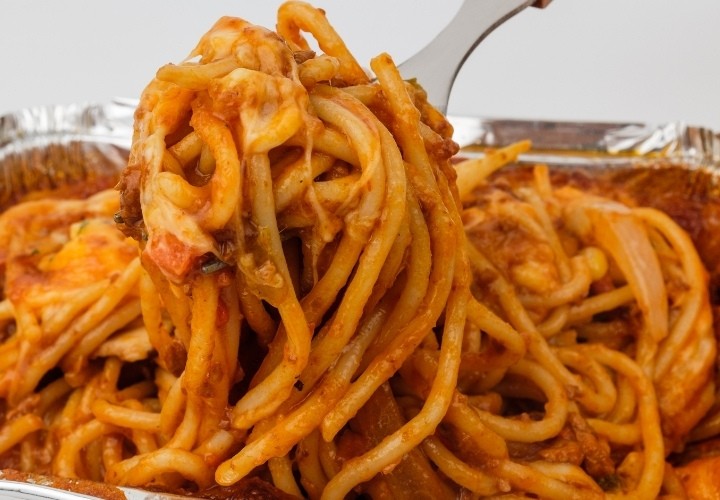 How to make the Ultimate Fried Spaghetti?

This cheesy fried spaghetti is a simple dish, but I’ll go through it in depth here and provide the information on the process so you can refer back to it if you have any questions.

To begin, boil the water in the saucepan for the spaghetti, keeping in mind that it will boil quicker if you cover the pot and sprinkle in some salt. You can also use leftover noodles. Simply heat them in the microwave for up to 2.5 minutes with a tablespoon of water before tossing them into the pan later to soften them up a little bit.

After that, cut your onions. I always do this with the extractor fan on so that my eyes aren’t irritated. Next, seed and cut the tomatoes, and grate the cheese after that.

I suggest using cheddar cheese, but you may use any strong hard cheese such as jack, Colby, or gouda, and if you’re feeling brave and want something new and exciting, try using Pecorino Romano.

In a large frying pan, heat the olive oil using high heat, making sure it’s nonstick. Toss in the onions and combine. You’ll cook the onions for approximately five to eight minutes until golden brown, as seen in picture one below. Still, you’ll need to move them frequently to keep them from sticking and burning.

When the water begins to boil, add the noodles to the saucepan. Set a timer for 10-11 minutes when it returns to a boil and allow it to simmer (stirring every now and then to detach the strands).

Keep turning the onions until they’re golden brown. Then add the tomatoes and a teaspoon of salt (as seen in image #2 above) and reduce the heat to medium-high.

Stir well to combine the onion and tomato combination and simmer for approximately five minutes, stirring occasionally, or until the tomatoes have broken up and resemble image number three above.

When the pasta is al dente, drain thoroughly and combine with the tomatoes and onions in the pan (image number four). Mix the spaghetti with the olive oil, tomatoes, and onions to coat it evenly.

This is when the fun starts. The cheese begins to melt through all of the spaghetti, resulting in crispy spaghetti and cheese crumbs on the bottom.

Your spaghetti should resemble the second image in the photo above. Finished!

How do you store Fried Spaghetti?

If there are any extras, store them in the fridge in an airtight container for up to five days. To reheat, fill the container halfway with water, shake it, and microwave on high for two and a half minutes. This meal should not be frozen since the spaghetti becomes rubbery.

Notes: You can use another sharp hard cheese in place of the cheddar, such as jack, Colby, Edam, aged gouda, Emmental, or Pecorino Romano.