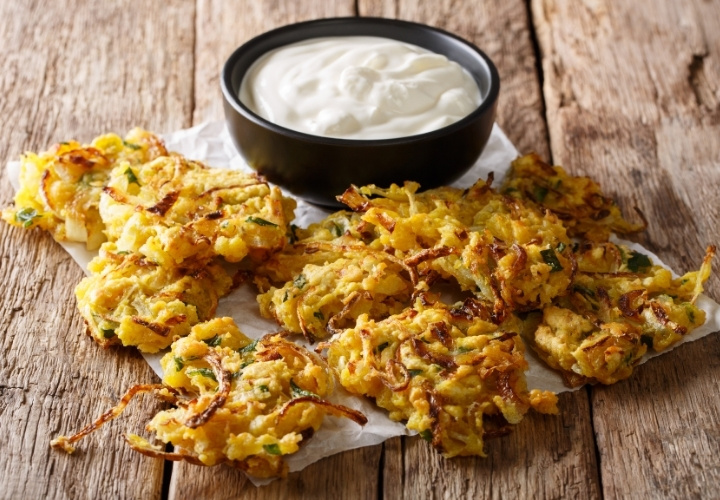 This street food is very popular in Maharashtra. There are many ways to prepare them. Here is my mom’s recipe, which she has been making for many decades.

Kanda Bhaji is quick and easy to prepare. It takes less than 30 minutes. Bhaji is also known for making pakoras in North India and bajji (South India).

Indians love pakoras so we see many varieties of Pakoda. This recipe only uses two ingredients to make the batter. However, you can make onion fritters from different parts of India using a variety of recipes.

Some variations of Onion Bhaji

Kanda Bhaji usually has a crisper texture than other types of onion pakoda. This is because the ratio of gram flour and onions is lower. Kanda Bhaji also goes by the name Khekda Bhaji due to its similarity to crabs.

Kanda Bhaji is crispy, but you will still get a soft, sweet taste from the onions. These fritters taste great even though they don’t have any spices. Sometimes, simple recipes bring out the best flavor.

Kanda Bhaji can be served as a teatime snack with hot masala chai. This snack can also be made at home.

Pin the image below if you like this Onion Bhaji Recipe!

How to make Onion Bhaji

Please rate this recipe if you have made it. For more inspiration on delicious cuisine, sign up for my email newsletter. You can also follow me on Pinterest.

Kanda Bhaji is a crisp, crunchy fritter made with onions and gram flour. Popular street food from Maharashtra.